No One Who Cares 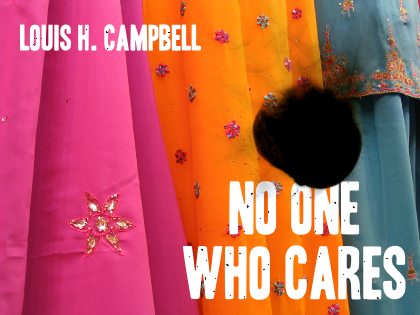 Concept: The issues of gendercide and women dehumanized in this riveting story are depicted in the burn and flame marks over the picture of different swatches of elegant fabric overlapping each other. The storyline on the abuse of women and the frustrating lack of universal concern about it is portrayed by the rich pieces of colourful cloths captured in a photograph burned, stained and dirtied from abuse. Just like the story, the cover weaves through tattered beauty – the beauty that the Lord has made in woman ravaged for all the wrong reasons and it seems like there is No One Who Cares; it is the beauty of womanhood stained and used, but the beauty comes through in spite of all the abuse. The cover follows the setting of the story in India, which is also the inspiration for the typeface shapes.

This is the story of an American couple who desperately want to have children but have been unsuccessful for fifteen years of marriage. They are now looking into adoption. He is a hydroelectric engineer under contract in south central India to refurbish a power station that anticipates reopening following the monsoon season.  He is introduced to various situations that are completely alien to him. When his wife arrives, they are encouraged to attend a gendercide conference in Mumbai. However, she is abducted from the airport in a ruse that is related to the Bollywood mentality. After much stress, she is rescued but having suffered much abuse in a world gone berserk.