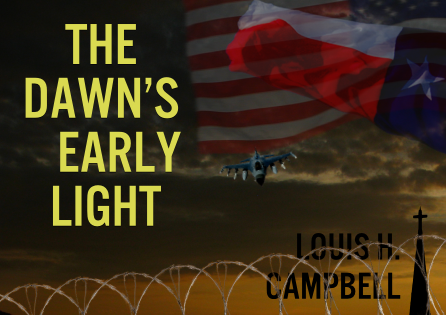 Concept: This design is a coming together of all the elements the author envisioned for the book cover - from the storm clouds of early morning, the cross in the shadow and the flags in combat in the air, right down to the church building with a cross steeple, the U.S. Air Force F-16 coming at the enemy line in the angry sky and the bright razor wire wrapping it all up -- the entire graphic captures what the author deems as his most intense work of fiction yet.

With the title coming from a line in the U.S. National Anthem, The Dawn's Early Light

is a novel set slightly in the future, and brings conditions into confrontation with the liberals and their social agenda against the conservatives and their faith agenda:

What if the Federal Government was immoral? What if the liberal majority in the government developed and unleashed an unmasked agenda against any and all conservative positions, and in response to a massive peaceful protest against abortion clinics around the country, the government countered by taking into custody all protesters. Women and men were segregated and sent to re-education centers that were former missile sites no longer as part of our nation's defense.

What if Iran fired a missile at Israel setting off an international incident of terrifying possibilities? With a massive military call-up through the War Powers Act by the commander-in-chief, and the downward spiraling of domestic conditions related to the over one million people detained in the re-education centers, the politicians have an epiphany - release federal prisoners on an early release program and hire them to guard the re-education centers.

The outcome produces the scenario that provokes the State of Texas to secede and re-establish the Republic of Texas. With a vertical split in the U.S. Military, conservative elements align with the new Republic and a precision strike on the re-education centers liberates the personnel. This scenario produces the ultimate conditions for a second American Civil War. Of course, it could never happen here - could it?