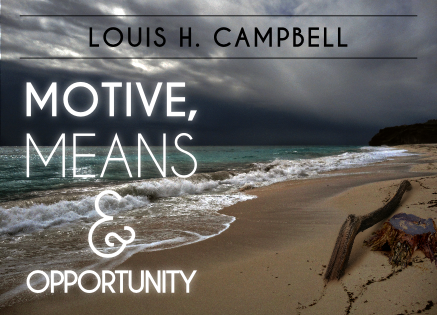 Concept: From the author of this puzzling and intellectual work, himself, one word aptly summarizes this design - sinister. Apart from the typography reminiscent of fashion magazine spreads, the entire shot used in the design is left as natural and organic as possible while taking advantage of a deliberately vacant focal point to give the impression of holding one's breath in clueless anticipation. Striking a delicate balance between lifting significant elements from this finely-crafted suspense thriller and not giving away too much information so as to spoil it, the design perfectly captures the intrigue, mystery and overwhelming twists and turns all in a single still shot of the primal setting of this just-can't-put-down read.

From the very beginning of the story, Motive, Means and Opportunity

has a hold of you and won't let go. The refined world of Los Angeles fashion modeling is uncovered with a bizarre crime whose circumstances are not as they seem.

What initially appears to be a clear-cut case soon becomes increasingly complex-and dangerous. In the shadowed world of government counter-intelligence, national interests all too often conflict. Extreme wealth allows even the most pursued rivals to slip through the cracks.

Intrigue, espionage, and bureaucratic government agencies are no match for Homicide Lieutenant Sheri Clearman, a free spirited detective with unusual perceptions and a disarming personality. The perky lieutenant with her elite team engages the crime which burgeons into an unfathomable event that they solve. Learn just how well the most cunning plans can be disguised...