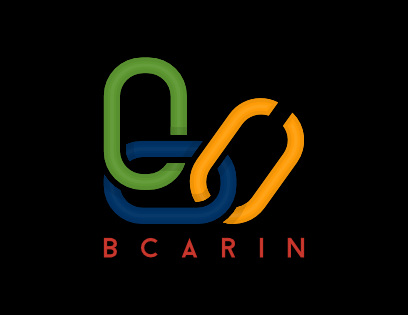 Concept: (This logo is the winning entry to the BCARIN Logo Competition [archive] held last September 1-October 14, 2013. This design brief is independently produced by Byromedia Computer Consulting and do not necessarily reflect the views of BCARIN. Ownership of the logo, its copyright and all future use have been transferred to BCARIN for BCARIN’s exclusive use.)


This design is all about linkages – institutional, business and community partnerships that give the network its unmistakable identity: collaborative, innovative, cross-disciplinary and capacitating; linking the academe, private and public sectors by making strong, meaningful and well-researched connections to help the world one project at a time.


Using three, connected heavy chain links to show substance and relationships across fields and responsibilities celebrates the initiative’s solid mandate with a visual representation of grounded stability forged with unbreakable strength coupled with an all-encompassing flexibility that goes beyond barriers and challenges of all kinds.


The three chain links also subtly form the initials, “BC,” with the first two on the left forming a lowercase “b” and the third one on the right with a gap forming a “c”. The practicality of the chain alludes to the application of research findings, the meaningful alignment of the links to form the letters tips a hat to innovation, and the connectedness of it all is a nod to networking.

Moreover, the level positioning of the letter “b” characterizes self-composition and sensibility, while the “c” slanted upwards depicts having a forward-thinking attitude – two major characteristics aptly describing the network and its endeavours. In addition, the deliberate gap on the third chain that forms the letter “c” portrays a ready openness to make the next connection, and this third link proceeding from the first two as its base signifies anchoring these newly-formed relationships to existing ones to make an ever-increasing, ever-strengthening band of momentous unity.


The logotype sports clean and crisp geometric glyphs in semi-bold slabs, which, when combined with the avant-garde render of the ideogram, convey rock-solid strength in modern simplicity, while striking a delicate balance between timeless restraint and contemporary candor. The rendered name appropriately forms the visual base of the entire logo and a pleasant dock to the whole design.


Now, the colours. These hues spare nothing in paying lavish homage to the province of British Columbia – the upright green for its verdant mountains, the spread-out blue for its proud oceans, the rising gold for the royal crown and sun on its shield and flag, the ubiquitous red for its beloved maples, and the white spaces and background for its simply compelling dogwood*. The logo is versatile enough to be rendered in full colour, black on white, negative or various textures and styles, not to mention excellently scaling up to enormous proportions or shrinking down to miniature sizes.


All these visual elements and robust characteristics add extra layers of meaning and richness to the emblem rewarding the inquisitive mind and discriminating eye – a fitting tribute to all things exploring, enabling and embracing that is BCARIN.