The Secret Love of Nell Gwyn 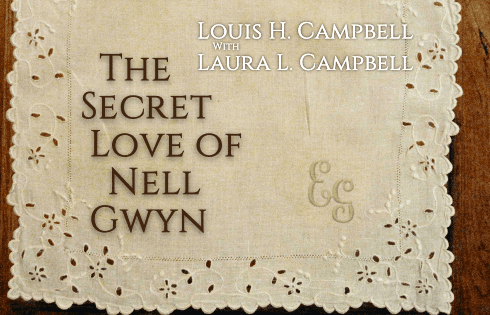 Concept: This cover features a tinted hand-embroidered handkerchief with the initials of the main character’s real name, referenced in this story set in Restoration England in 1660. Everything from the touches of gold to the handcrafted creation, from the stately typeface and colour to the strong wooden background, speaks of the royal complexity of the protagonist wonderfully captured in the setting of this historical fiction.

In 1660, after a brief romp with Parliamentarianism, England begged for the Monarchy to be restored. Charles Stuart II returned from exile in France and Holland, and thus started a licentious, immoral administration that was a reaction to the severe, austere measures under Oliver Cromwell. By royal decree, actresses appeared on the English stage for the first time. The age of scientific discovery, questioning of faith issues, and sexual debauchery complicated the politics of the day. The Bubonic plague spread across London and within a year the great fire destroyed much of the old city. At that same time, two people had been born on the same day on opposite sides of Covent Garden in West London.

The Secret Love of Nell Gwyn

is a different point of view of life during the raging times of Restoration England. This fictional account based on actual historical facts, provides a vivid insight into the roots of the arts and entertainment that emerged in the United States as a result of the initial settlement of colonies loyal to England. The legacies of our lives today has much to do with such history.