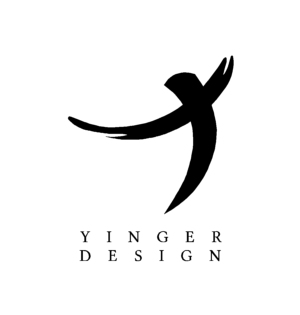 Concept: Timeless is what this design is all about. From the typeface reminiscent of 19th century book type to the calligraphic brush strokes, the logo exudes clean elegance that surpasses modern appeal with a classic aura.

The logo draws power from simplicity - a perfectly flowing and easy two-stroke brush gesture that communicates an organic, calming, soothing strength and stability. The brush strokes sublimely draw the letters Y and D, and taking a closer look reveals an endless amount of imagery, such as a strong face, a human figure in graceful motion, or a mighty tornado among others. The second layer of meanings gives the logo depth and a perfectly mystical feel, aptly bringing out the Oriental heritage of the client and beautifully laying it out with a semblance of ancient crafted handwriting.

The logotype forms a strong visual foundation for this orchestra of allusions by providing two solid lines of equal amount of serif letters that pull the whole concept of timelessness together. The white-on-black scheme forms the final ingredient of clean and classy elegance to altogether present a masterpiece of tasteful imagery and beautiful simplicity - two things that aptly describe the craft of Yinger Design.